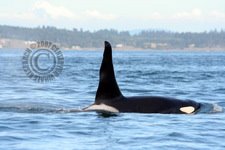 J-1 is one of the most well-known and beloved of the Southern Resident orcas, and was the first J-pod orca to be identified and cataloged by the Center for Whale research in the 1970s.  He is a large male, and his trademark 6-foot dorsal fin is contoured into waves – earning him the nickname “Ruffles” – and he is easily the most familiar and sought after orca among the Southern Resident population.  He has a loyal following of onlookers who have been known to spend hours in the areas where his pod often passes close to the shores of the San Juan Islands in hopes of getting a glimpse of him and his family. His presumed mother is J-2, the oldest of all the Southern Resident orcas (possibly 100 years old).
He often swims alone, and can be miles away from the rest of his family so although the scientists are concerned by the lack of winter sightings of this whale, they are not yet ready to declare him dead.  Let’s hope that he appears soon, and much like Mark Twain would be able to say “The report of my death was an exaggeration”.

“It is still too early in the year to have an official population estimate as not all individuals have been accounted for.  However, there have been several encounters and sightings of J pod where J1 has not been seen or photographed.
J1 is the oldest male in the southern resident community, estimated to be 57 to 60 years old.  He is an iconic figure for the entire population and by far the most easily identifiable whale.  His tall wavy fin has given him the name “Ruffles” and made him a favorite among visitors and local whale enthusiasts.   He was last seen on November 21st off Victoria.
Although there have been several encounters with J’s over the past few months, the pod configuration has been spread out and all individuals were not photographed.  Although J1 is most often seen in the presence of J2, the eldest female in J pod, he is frequently sighted off on his own far away from the rest of the pod.
At this point all we can say is that J1 is officially missing.  We will be keeping an eye out for him as we head into spring and encounters and sightings increase.”