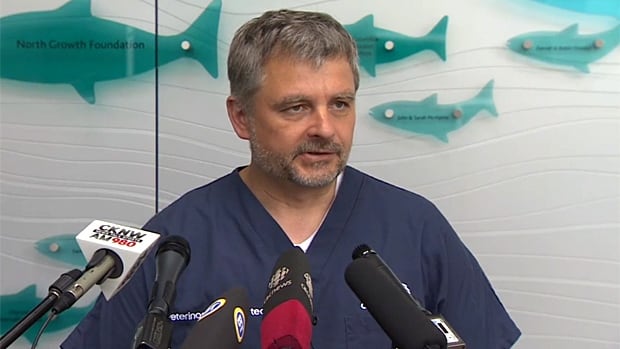 In Monday’s remarkable media briefing the Vancouver Aquarium’s veterinarian, Dr. Martin Haulena, gave a forthright, detailed summary of the life and loss of Hana, a dolphin who was clearly loved and treasured beyond monetary value. He answered questions fully, and spoke of success and failures, of learning, of regret.
When I realized that this wasn’t going to be the typical gloss-over, waste-of-time, say-nothing press conference that SeaWorld has taught us to expect in these situations, I scrambled to try to record Vancouver Aquarium’s impressive briefing. Unfortunately it didn’t work out, but if/when an archived copy is available I’ll share it here.
Typically, when a dolphin or whale dies at SeaWorld the public is told only that samples have been taken and that results won’t be known for several weeks…and then we don’t hear anything more about it. SeaWorld will usually refuse to disclose what happened when asked later, and it takes a Freedom of Information Act request to find out causes of death in past cases – seriously.  Worse, SeaWorld is no longer required to report their findings to the government, thanks to changes to the Marine Mammal Protection Act that the captive industry pushed through in the 90’s.


The aquarium’s briefing could not have been more different from what we have been taught to expect by SeaWorld.
“She looked up at everyone to have her last breath and her heart just stopped,” Dr. Haulena said, and went on to explain that the only other alternative to surgery would have been to humanely euthanize her when her symptoms first appeared, a choice they were not prepared to make. “Hana was a wonderful, fantastic, affectionate, loving animal. She was an amazing dolphin — certainly a friend to us,” said Haulena.
Anyone who has done everything possible to save an injured or sick animal can understand why, given the recent progress in medicine and science, the aquarium chose to go to great lengths and expense to try to save Hana. They flew in a team of experts and successfully managed to anesthetize the dolphin. Dr. Haulena carefully explained the risks, both in having to intubate her (similar to putting someone on a respirator) and the side effects from the drugs given to keep her pain-free.
The vet also explained in detail what had gone wrong with the dolphin. Essentially her gut had twisted, similar to the often lethal colic experienced by horses, and the necropsy (autopsy) revealed that she had an abnormally small opening in part of her gut, which may have been a congenital malformation.

Dr. Haulena touched on the difficulties faced when evaluating stranded animals, which are often euthanized because of our limited resources to help them. He explained the consequences to dolphins and whales of bearing their own body weight even for the shortest time and the problems this created for surgery.
Both Hana and her companion Helen had been rescued from entanglement in fishing nets by an aquarium in Japan where the dolphins lived a couple of years before coming to Vancouver ten years ago. As I wrote previously (Dolphin Injury to Ribs May Lead to Death in Captivity, But Heal in the Wild), net entanglement can cause serious and often not visible injury to dolphins, so it may be that neither Hana or Helen would have been able to thrive in the wild.
The information below shows the magnitude of the injuries that are caused by net entanglement and may give insight into why release may not feasible. Dolphins that are successfully released may have internal injuries and broken bones, depending upon how they are handled and whether the fishermen are willing to cut their nets –  and often they are not.

Fishermen and observers working aboard drift net vessels have noted that it is often extremely difficult to remove the carcasses of dolphins, pilot whales, and beaked whales from their nets. Fishermen often mutilate the carcasses of small cetaceans to facilitate disentanglement. This is particularly true for large animals that are severely entangled. In such cases, the flukes, flippers, or dorsal fin may be cleanly severed
In contrast, small-bodied animals, such as porpoises, are often disentangled without mutilation. Fishermen will sometimes make a longitudinal slit along the ventral surface of the abdomen before discarding the carcass, in the belief that it will be less likely to float and reach shore.
Many dolphins killed in fishing gear also exhibit ante-mortem broken bones and associated blood clots and macerated soft tissue. Typically these bones include mandibles, flippers, ribs or the vertebral processes clots.
Some bones may be broken postmortem, when the carcasses are dropped on deck or swing against the side of the vessel.

The aquarium also recognizes that the remaining Pacific white-sided dolphin, Helen, will be happier with a companion, and are planning to unite her with another rescued and unreleasable cetacean, the young false killer whale that they rescued last summer. It will take time for captive dolphin institutions to make the change from what worked and what was accepted in the past, but the Vancouver Aquarium’s willingness to fully inform the public about both the origins and death of its dolphin is a huge step in the right direction, in contrast to how SeaWorld responds when their animals die.
The Vancouver Aquarium may be transforming itself into what most people would like all captive dolphin facilities to be; a true rescue and educational institution with the courage to stand up to the demands by people on both sides of the captivity debate. They deserve time and space to demonstrate that they will continue to focus on rescue, and will continue to be transparent to the public in their efforts.
Still, we’ll keep an eye on them…